Jacqueline Cramaille, a friend and roll model to myself and others, passed away recently from cancer. I didn’t know her as well as I now wish to. I knew how she spent her time, what she did for work, and a brief knowledge of her hobbies. Very brief. I knew she loved Iris flowers, books, and science fiction. She lived simply in a one-room apartment, alone, without even a TV. But when I would spend time with her in the past I always loved getting her opinion on older SciFi series and finding out what book(s) she was currently reading. It was a hobby we both shared. She loved loved loved Star Trek. She could geek out about Star Trek for hours. (This was a woman in her 60s haha). She didn’t like Star Wars as much because she felt the Force was too magicky. And she never liked Doctor Who (my favorite television program) because “he” was too creepy (probably referring to Tom Baker). She was a trip.

When I found out that she had brain cancer it hit me very hard. She was given 30 days to live and amazingly she tripled that. In that time I visited her only once though. She asked me if I would make a small book of pictures she had taken of her favorite flowers via Shutterfly and I told her I would. This was the first time I ever entered her humble apartment and wow. I underestimated her love of SciFi and books. She REALLY liked to read. She had bookcases lining each wall, reaching all the way to the roof, each filled with campy paperbacks. One bookcase was literally all Star Trek novels, dating back to the early seventies. There were so many they had to be double-stacked, and more were stacked on the wall next to it. It was a tremendous collection. I had to admire it. 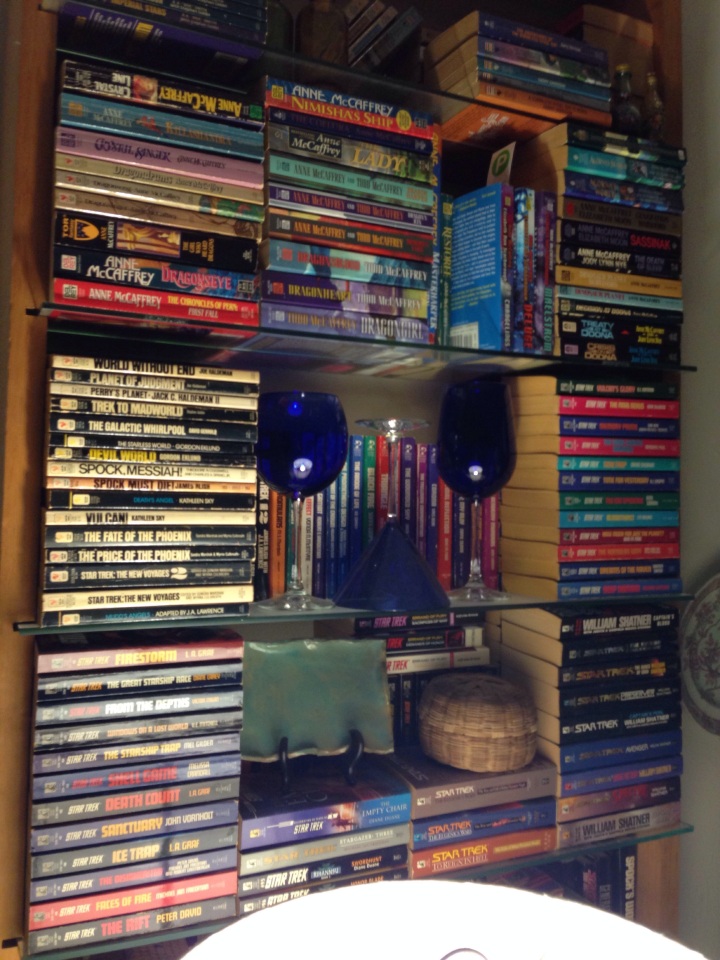 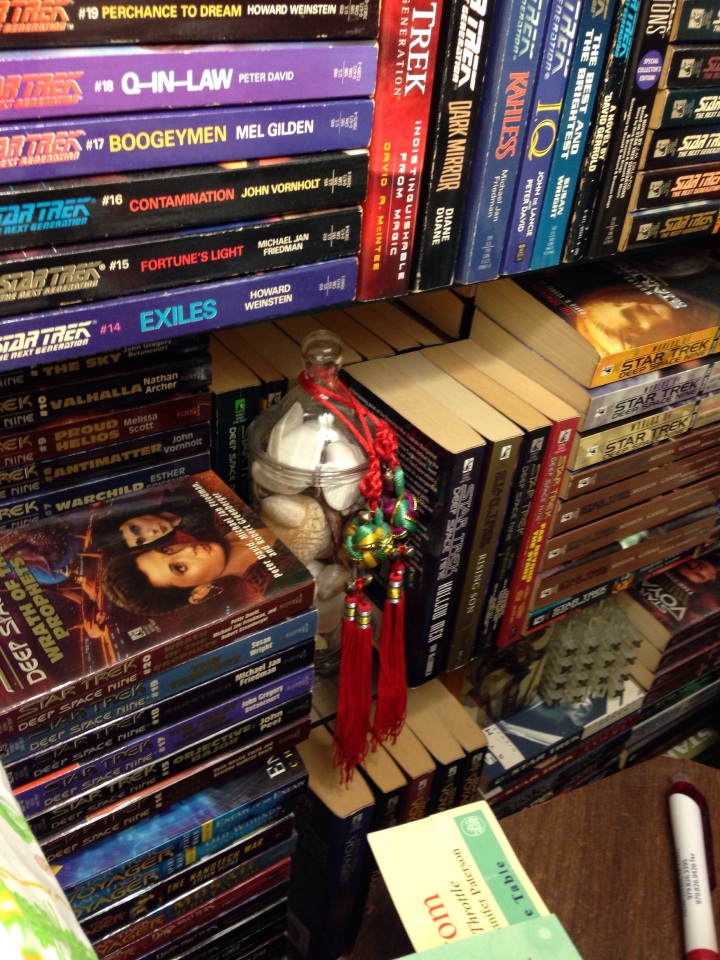 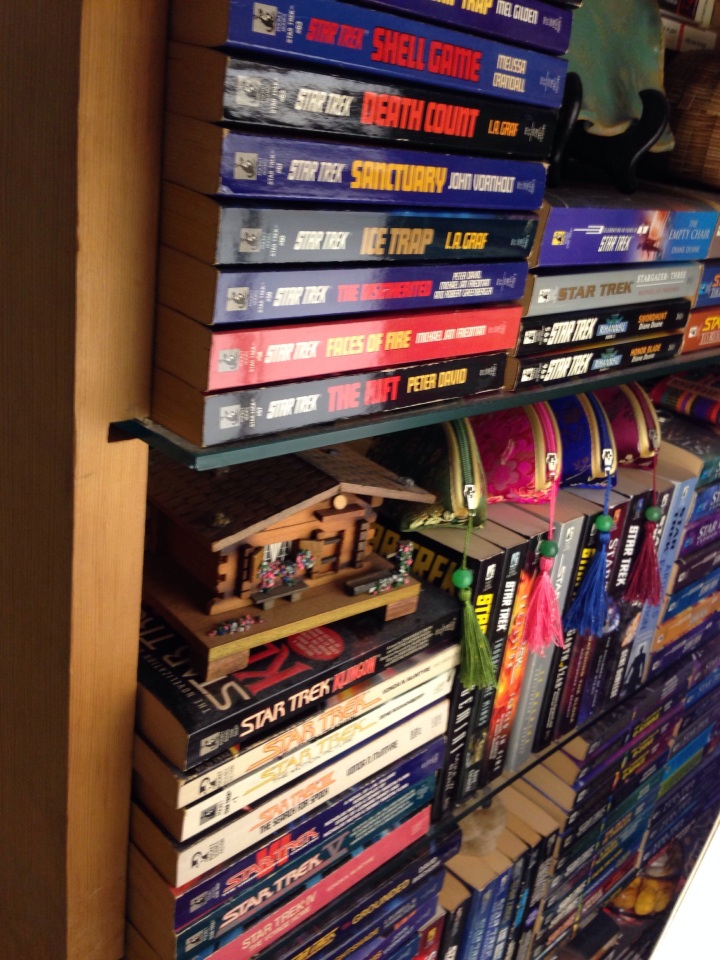 Just a few pictures I took that day I visited her and please do note, this is but one bookshelf. Well, I did end up putting that book together and ordering it, but I never got to give it to her. I was in Costa Rica at the time it came in through the mail. I had my mother give it to her, and this turned out to be the last time she went out publicly. She went into hospice soon after, and I was honored to learn that the book I made her, entitled “The Life of the Iris” was apparently one of the few things she took with her. She passed soon after that, but she was well cared for throughout that entire time. Upon returning home from Costa Rica I learned that she had placed my name in her will, putting me in possession of all her Star Trek novels and other science fiction literature. And frankly I’m dumbfounded. I never would have realized how highly she regarded me. Not only do I now own the most spectacular collection of Science Fiction novels I’ve ever seen, but I have absolutely no idea what on earth I’ll be doing with them.

Frankly, the amount of books bequeathed to me has to be around 500. A final count has yet to be made, as I haven’t even picked them all up yet. When I came to pick them up from her apartment, there were six boxes jammed full, and that was only about half of the bookshelf designated as “Star Trek”. So I’ll be making a second trip sometime to get the rest. I hope I don’t have to make a third. Will bring extra boxes just in case. But truly, I can’t think of another time I’ve felt more honored than I am now, and this measly little blog can’t possibly express my gratitude for the kindness she’s bestowed upon me.

I’ve just finished placing the Star Trek books on a shelf next to my staircase. These are solely titles adapted from The Original Series – I’ve yet to pick up or organize any of The Next Generation, Deep Space Nine, Voyager, Enterprise, or other Star Trek novels.

And then, packaged along with the Star Trek books were a bunch of other old and campy SciFi gems I had never even heard of before. Among them, the seven book Gandalara Cycle, some Venus Prime, titles by Simon Lang, Harry Harrison, several series written by author E. E. “Doc” Smith, and a LOT of novels by authors Anne and Todd McCaffrey including 95% of the Dragonriders of Pern series and many others. There were even a few books translated into French. 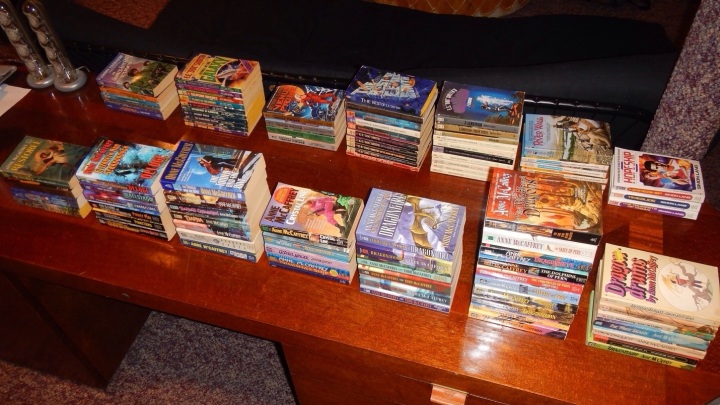 I’m excited and terrified about grabbing the rest of the collection, because it really is a lot of books. I spent a good portion of the day today sifting shelves and making room. I’m not sure what I even want to do with them all just yet, if anything. Should I read them and review them on this blog? Should I get a license to vend in NYC and plop up a stand to sell them? Sell them at this year’s New York Comic Con perhaps? $3-5 bucks a piece? Would it be wrong of me to sell them? They’re all in an uncannily good condition. Or should I keep them as decoration and for personal use? I’ll have to decide. I’ll check back when I’ve received the rest of the books.

I want to first catalogue them all and determine their worth as a whole. Anyone have a good tool or know of one for cataloging your personal library? Excel can get a bit boring.

39 thoughts on “Books I’ve Been Bequeathed”