For those of us who chose to watch the brilliant ABC special last night, Marvel Studios: Assembling a Universe, we were treated to our first look at Avengers 2 concept art. Now, I’m not one that usually cares about concept art, and realistically this may be one of the only times I’ll ever blog about it, but I just thought this was so cool. Not only do we catch an artist rendered glimpse of the Hulkbuster Iron Man suit in action, but we finally get a good idea as to what we can expect from Scarlet Witch and Quicksilver.

As you can see, the Hulkbuster suit is of Stark design, and this particular scene will most likely have to do with the filming that occurred in Johannesburg earlier in the year.

Scarlet Witch (Wanda Maximoff) is quite a mysterious character within the comic book world, and being the daughter of Magneto she’s got more than a few issues. Will be interesting seeing how they approach her in Age of Ultron, especially since they can’t make mention of Magneto in the film. I love the outfit, but I wonder if this is an early-act costume, seeing as how it doesn’t look like something an Avengers member would wear to battle. Her powers include probability manipulation, reality alteration and “chaos magic”. She will be played by Elizabeth Olsen.

Her brother, Quicksilver (Pietro Maximoff), is a more deviant character, and one of my favorites since I’ve been a kid. This looks more like proper fighting attire. He will be played by Aaron Taylor-Johnson. 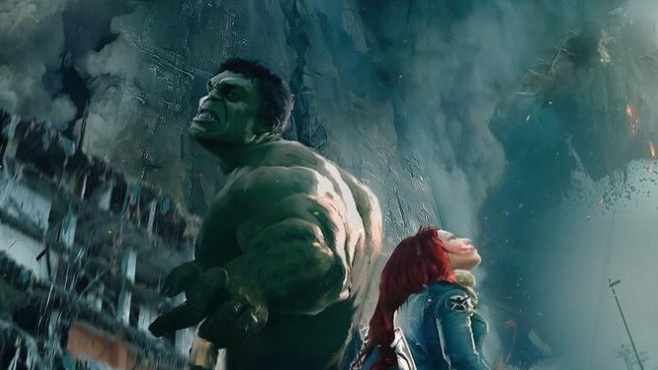 Further art included shows The Hulk and Black Widow back to back.