My first foray into the world of conventions (that aren’t comic book or anime based), BookCon was a very new thing to me. As I’ve read more in the past year with Geekritique than I have in my entire life, going to a book themed convention just seemed like something I needed to experience, as both a reader and a blogger. I knew it wouldn’t be totally up my alley, as far as my love of science fiction and fantasy goes, but I was still curious. And heck, it took place at the Jacob K. Javits Center in NYC, home to my favorite Con, New York Comic Con.

I bought a Saturday pass for $35 for both my wife and I – to be picked up at will call. Mistake. I could’ve spent an extra $5 each to buy the tickets onsite, and avoided the massive line outside in which we waited semi-patiently to enter air-conditioning. And why we were sectioned off outside of the building when there was ample free space inside the building? Beyond me. So we wasted an easy 30 minutes there. The actual will call procedure went by without issue.

I missed most of the first panel I wished to attend. It was an introduction panel to some of Tor’s new authors talking about their upcoming books. I made it to the tail end, but it ended early due to lack of audience participation. Thankfully I was able to pick up some free arcs (uncorrected advanced reading copies) that they were giving away, most of which don’t come out until after September!

That being my first experience with the Con, it was off to a great start. We got the panelists to sign their books, which lit up their faces (must be such an awesome feeling), and that too was pretty cool. Can’t wait until my schedule clears enough for me to dive into them. As far as books and authors go though, I hadn’t read any books from any authors present, aside from Ken Liu (whom I didn’t end up meeting), so there was very little super personal moments that I’ll cherish deeply in years to come, but eh. It was a good time. My wife snatched up a really cool Breakfast of Champions t-shirt, as Kurt Vonnegut is one of her favorite writers. There was a section dedicated to comics, something that felt more akin to Comic Con, and Valiant Entertainment had an awesome deal going on. I paid for 3 TPBs (trade paperback) and received 5, a healthy sampling of what the up and coming company has to offer. 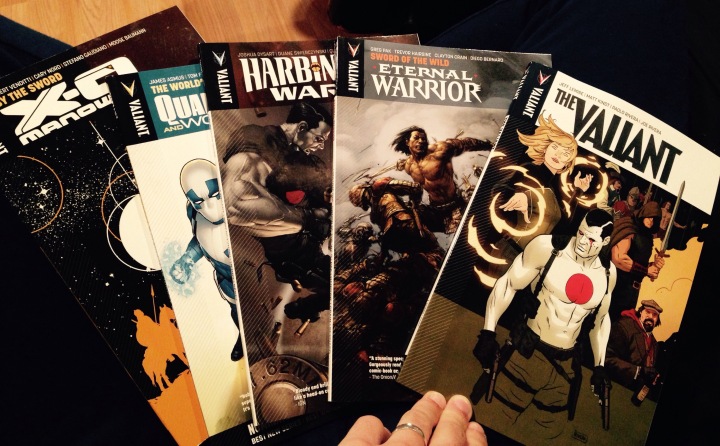 For those that may remember me mentioning, Valiant Entertainment is a company you should be watching out for, as they’ve just signed a 5-picture deal with Sony to create a new onscreen comic universe. Also, I really love Harbinger!

But the rest of the con seemed to fall by the wayside after that. It was maybe a 6th the size of NYCC, and perhaps a tenth of the usual attendees. I like the fact that the attendance was significantly lower than the typical 100,000 plus attendance that NYCC boasts on Saturdays, because there was a ton of breathing room. Rarely did I feel I was lost in the crowd. But at the same time, there was so very little to see, that by noon I was already revisiting several of the floors highlights. We met up with friends and checked out a few panels of little consequence. One was a Star Wars book panel, where they had a few children’s writers talk about what it was like writing in the newly scaled back canon of the Star Wars universe. They spoke about how they met with the Lucasfilm Story Group, and how they tackle what is canon, what can be canon, and what you definitely can’t touch. Very cool stuff.

But other than that it was, frankly, very quiet. There was no cosplay, an uncomfortable amount of romance literature, and very little Sci-Fi/Fantasy. And it seemed to me there were more TV and movie celebrities pushing biographies than renowned authors. It turns out this was an offshoot of BEA, the BookExpo America convention, and it certainly made BookCon feel like a bit of an afterthought. Unless it becomes a bigger convention, with more to do and see and enjoy, it doesn’t seem like something I’ll frequent year after year. But it was enjoyable, and my money was well spent.

9 thoughts on “My (Mostly Positive) Experience at BookCon 2015”