Hello, one and all. I’ve got some awesome content coming your way today, Friday. We’ll start it off with our latest Friday Spotlight! I’ve been slacking of late, having not posted a spotlight in a few weeks, but I’ve got comic book creator Jonathan Nolan here with me today, to answer some questions, and to talk about what pushed him to do comics. This interview with his brand, Flying Tiger Comics, has been long delayed, so we’re both glad to get it out to you guys. He’s both a writer and an artist, and posts much of his work over at his Deviant Art page, which we’ll link to below. Without further ado:

He’s got two recent projects he wants to share with the world, Sinbad! and Bogatyr, and you can find both of those at his page! So Jonathan, let’s talk Sinbad! What’s that all about?

Sinbad! is a Xena / Hercules type take based on the old stop motion films but also on historical research as to which Caliph it would have been in which story, etc. Sinbad is generally set in the time of Haroun al Raschid but in my stories Haroun is still a young boy, tagging along at times along with his sister (well one of his sisters) as Sinbad! has adventures.

I called it Sinbad! with the exclamation point to distinguish it from other Sinbad offerings and because it turns out 99% of the time in films and elsewhere people are accosting him thus – SINBAD! Sinbad! Watch out Sinbad! I thought it was funny.

I try and get the settings accurate in the sense of what the beliefs in the Dark Ages were.

There is a whole lost and or hidden history of the Dark Ages. It’s the period of Sinbad, Charlemagne and Haroun but before them it’s also the period of the establishment of Venice and its weird cults, King Arthur, Serbo, Roland, the Merovingians… Most of what people think of as islam and christianity either didn’t actually exist as claimed or was WILDLY different.

It’s also the era of great Indian kingdoms now lost to time like Trevancore and so on.

That’s so cool. Now all I want to do is yell out SINBAD! And what about Bogatyr?

Bogatyr is an adventure game brought to life a bit like Conundrum is a world where super powers are all stage magician tricks. In Bogatyr there’s real powers but it’s all put out in terms of different sorts of puzzles and adventure game tropes. Likewise the heroes and villains conform to the puzzle-mad compulsions of their universe.

Having said that, it’s also a classic quest – which again is adventure game compatible. Dragon’s Lair showed a classical knight questing for princess story, Bogatyr shows a classical adventure game character working through challenges to obtain his “treasure”. What is it? How did he inherit the house? Who knows more than they pretend to know?

Wherever possible I try and include the reader in the puzzles not just baldly slot them in and move on. I was a writer first and I am still a writer foremost. The art for me had to develop because I could never get an artist in sync with how I work. Which is my fault. 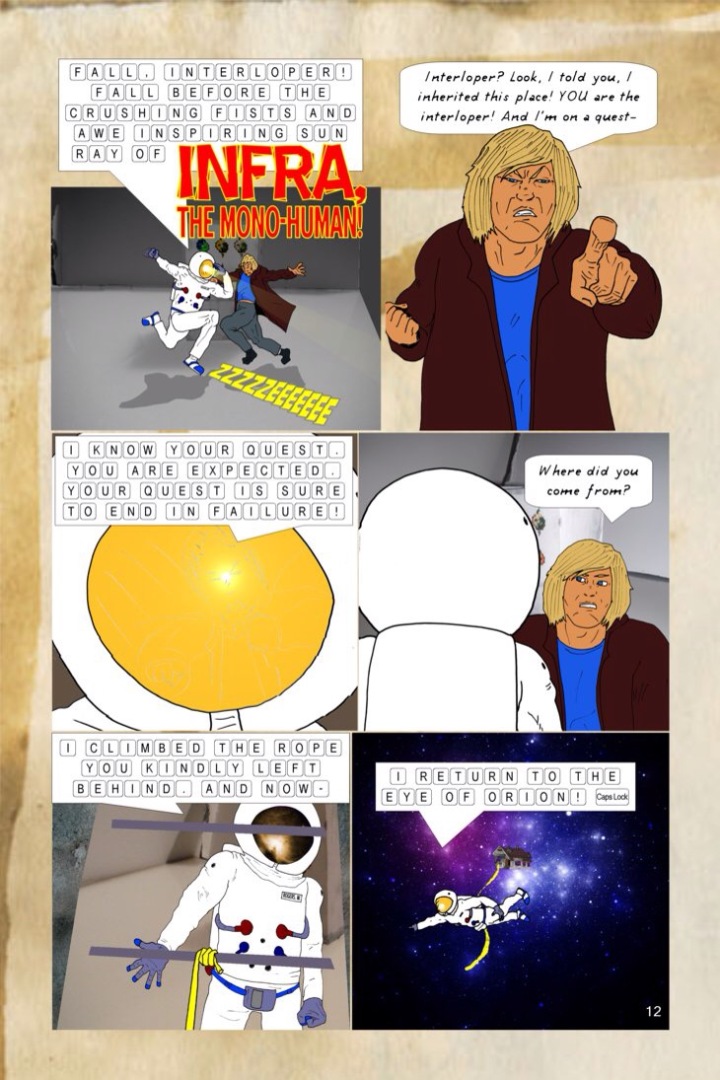 Nice. So, can I ask about how you began making comics?

I was a child prodigy and learned to read at 2 years old, starting with comicbooks (and ending up with encyclopedias two years later. I am a mutant, it seems)

I wrote stories from a very young age and was published professionally at age 17 through to age 25 in the traditional way – pseudonym, agents in Australia and the USA, whole nine yards. It sickened me, due to the editing, poor payment even of a (relative) hit and so on.

My father, God rest him, was a very senior government financial guy but his first love was architecture and he was a talented architectural artist and could hand draw amazing stuff, looking like it was CADD drawn in today’s terms only with a rich life to the detail. My mother is a fine artist who paints and produces oil and watercolours for exhibition. So it’s in the blood, even though my own art is very late in developing and still very crude sometimes.

The Dan Slott destruction of Spider-Man was the last straw to prompt me to really try and express myself in my own comicbooks. That meant drawing my own stories basically or risk being held hostage to someone else’s timetable.

The artwork is distinctive, and seems to use patterns or other for color and life. How do you get that effect?

I hand paint watercolours on stock paper or card, experiment with collage, basically just do art, then scan it when it’s dry and use it as fill and texture. Sometimes I will buy a licence for eg the hawaiian shirt in Conundrum, but usually I do my own. I like the watercolour effect but I don’t have time at the moment to handpaint a whole comicbook. Otherwise I definitely would. I like how vivid it is, it sort of makes the art bounce which is good because I devolve into a cartoony style too much. It’s a major flaw, other than my general lack of very high skills. I hold myself to high standards and my art is one of those disappointments in life we all have to deal with. Sometimes I nail it but not consistently enough yet.

Eh, don’t beat yourself up. I can tell it’s getting better. Have you finished works in the past? Where can people find them?

I put them up on Amazon and the National Library of Australia has a complete collection to date of all finished work in their general collection.

When it comes to personal preferences and taste, what inspires you? What are you into in the comic world and other mediums?

I have catholic tastes with two exceptions. I absolutely hate the scratchy blobby spongebob squarepants sick looking stuff unless it’s in an adult cartoon and I equally loathe a great story that has art which really doesn’t fit – some recent lovecraft adaptations fall into this. My favourites are Oglaf, an ongoing NSFW humor webcomic series, and I’ve always like Frank Cho’s art in terms of its life. I like the cheesecake stuff too but I prefer him when he’s really bopping along telling a story instead of just drawing softcore.

Likewise I love the dynamism of Frank Frazetta more than the content. He could draw a parked car and make you want to drive it. That’s a fantastic skill level, true grandmaster level. Finally I also like the commitment to cause of indie artists who tell their own story in their own unique style and just plough on and finish. Sometimes even an unappealing initial offering becomes something good and solid through sheer volume and familiarity. Compare original Cerebus with final Cerebus.

Where can we find your work?

Kindle is the main place at the moment but it will be printed and sent around the place in early 2016. Believe it or not most of my recent output has been political activism – trying to show that there is more than one tiresomely SJW culturally marxist voice in comics nor is there only one standard of “cool”.

A lot of this period of work has turned around two pastiche conceits:

PKD is my equal favourite author, obviously. I read him at a very young age and that definitely warps the mind. My other favourite is Agatha Christie. Such a smart lady. Precognitive almost with her level of smarts.

DA is where I put stuff up, as much as anything to “publish or disseminate” and therefore attract some level of copyright protection: http://flying-tiger-comics.deviantart.com/

Thanks so much for your time! Any final thoughts?

Thank you for having me! Yeah, one last thing, although there is a lot of art and writing in modern pop culture and comicbooks in particular that I actively hate, I do NOT spend all day every day attacking the people who like it. I voice my views, on behalf of a surprisingly large number of people who share them but are too afraid to voice them, but I don’t fight and troll unless injustice (real injustice, not SJW twaddle) is occurring. Hate the thoughts, not the thinker. And as Cicero said, “Be kind to those whom you meet. The chances are that they fight a hard battle too.”

You can find Jonathan Nolan at: