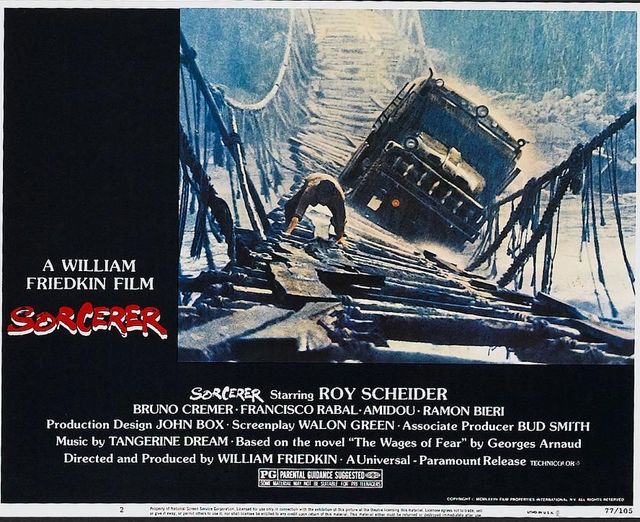 The year was 1977, the month June. George Lucas’s game-changing Star Wars was drawing record crowds to the theatres. Amid this brouhaha, William Friedkin, Oscar-winning director of such films as The French Connection and The Exorcist, released his film Sorcerer based on the Georges Arnaud novel “Le Salaire De La Peur” (The Wages of Fear), which had a French adaptation in 1955, by Clouzou.

Sorcerer cost somewhere around $21-22 million to make and would only make $9 million worldwide. It also received mixed to negative reviews at the time of its release. It was that pathetic thing no one likes to own in showbiz – a critical and commercial dud. For those of us who don’t know what happened to American films competing with the likes of Star Wars, Sorcerer is the answer. It was a film in the New Hollywood mold that had started in the late 60s and continued giving us masterpieces throughout the early- and mid-70s. However, Star Wars changed all that. No longer would intellectually demanding films be the benchmark of critical and commercial success. Instead, The Age of Blockbusters was born. Granted, Jaws in 1975 was a precursor to what Star Wars achieved (a summer blockbuster and family entertainment film) but the obliteration was complete with Sorcerer. Here was a director who had won the Academy Award, a lead actor (Roy Scheider) who was an Oscar nominee, and a film that showcased human behaviour and unflinching grit in the face of nature’s fury. Sorcerer could have been a revered classic. Instead, it became what its working title was earlier – ballbreaker.

Before you think I’m one of those rare, ugly creatures who love to hate Star Wars, let me state that I wholly enjoyed that film. Groundbreaking special effects, great direction and an amazing cast gave us what audiences of all generations have come to love. It also ushered in, as I said earlier, the age of blockbusters. Without Star Wars, we might never have seen the MCU or the DCEU and their likes. So, thanks to George Lucas!

But I also love movies that connect on multiple levels and engage you psychologically, and I loved Sorcerer. Mind you, it is an existential thriller at its outset. The movie is about four outcasts of different nationalities who are employed by an oil company to transport nitroglycerine in two trucks through the South American jungle. Sounds simple? Wait till you watch it. It opens with four different vignettes which set up the reason for our four leads to leave their lives and come to the jungle, where their life is a virtual hell. The 2-hour film devotes its entire first hour to setting up the action but there’s enough time left after that to deliver a thrill-a-minute ride through the jungle. You can almost feel how difficult it’d have been for the crew to shoot many of the scenes. The bridge sequence, where both trucks have to cross a wooden suspension bridge over a flooded overflowing river in torrential rain, might well be one of the greatest set-pieces ever filmed. The rundown trucks sway on the bridge, the wooden floor creaking (and cracking) at times, and blinding rain complicating matters further. Add to this the fact that all four characters are criminals of varying levels and that most stunts were performed by the actors themselves, Scheider included. The perilous conditions they are in onscreen are what they actually faced during production. Their fears, greed, hopelessness and grit make for a compelling film.

At the time of its release, Sorcerer was probably also hampered because of its title. Viewers who went in expecting the supernatural, ala The Exorcist, were thoroughly disappointed. It got to such a stage that disclaimers had to be put up that it was not a supernatural film. Also, 16 minutes of the movie’s prologue, which showed three of the four leads’ backgrounds in Mexico, Jerusalem and Paris respectively before arriving in New Jersey, had no English language dialogue. Confusion led to walk-outs and necessitated another disclaimer on lobby cards.

The depiction of how Man, when pushed into a corner by adversity, fights back and fights on, has been a staple of Oscar-nominated movies for decades. Unfortunately for Sorcerer, it could only garner one nomination, that for its Sound which – ironically – it lost to, you guessed it, Star Wars.

The good thing as a movie fan is, Sorcerer has gained a critical reappraisal in recent years, leading to it becoming something of a cult hit. Review sites too, have great scores for the film. Rotten Tomatoes scores it at 80% with an average score of 7.3/10. IMDb rates it 7.7/10. At the time of its release, Roger Ebert had put it among the ten greatest movies of the year. Looking at those scores, it’s unthinkable that the film was panned when it released. It is indeed a shame that the film couldn’t resonate as much with fans and other critics of the day.

I will keep contributing here on Geekritique about TV shows, books and movies.

You are welcome to visit my blog Musing Site.

Thanks for reading. Share your views and thoughts on the film in the comments section.

11 thoughts on “Sorcerer: A Forgotten Gem”