Earlier in the year I had the privilege (right?) to introduce my fiancée to Star Wars (both trilogies, for better or worse). And recently we finally got around to watching my all time favorite movie series, The Lord of the Rings trilogy, something she had also never seen before. Ultimately it got me thinking about what my favorite trilogies are, and how my opinions ranked against others’.

So today I give you Geekritique’s top ten greatest film trilogies of all time. But not really. Odd enough, the way I came about this list isn’t my personal preference, or any opinion of mine whatsoever. Lists as massive as these require more than one opinion. So naturally I went to the Internet, pooled together 14 ranked lists of favorite trilogies and averaged their placement to find a truer consensus of which trilogies are actually the greatest. Perceived fan wisdom, if you will. Some sites listed more than 10 trilogies, but I only qualified those in the top ten bracket. I also disqualified several sites for only providing top 5’s as this skewed my data. Some sites (annoyingly) gave tie votes to some rankings (of which I chose my personal favorite of the two).

Although the data pooled together far more film trilogies than simply these ten, I chose only those top ranked candidates which were voted highest and most often for this list. Notable mentions include Krzysztof Kieślowski’s Three Colors trilogy, Park Chan-wook’s Vengeance trilogy, and Sam Raimi’s Evil Dead trilogy. Links and citations to each of the lists pooled from below.

Directors Andy and Lara Wachowski mined some serious cinematic gold with their 1999 release The Matrix. It’s one of those films we still see the ramifications of in modern television and filmmaking, let alone the uncountable bullet-time parodies and rip-offs we’ve seen since. I’ll be the first to mention though that The Matrix trilogy shouldn’t be in the top ten. The second and third installments really fell off the map, despite their aim of making the series even more epic. But hey, I didn’t put it here. Complain somewhere else.

For the sake of this list, let’s just forget about the Kingdom of the Crystal Skull and focus on the true trilogy. Steven Spielberg’s Indiana Jones is an undeniable classic. Hot on the heels of The Empire Strikes Back, Harrison Ford gets another once in a lifetime role. As I write this all my mind can conjure is the immense score by John Williams. Seriously, you know it’s stuck in your head too.

8. Back to the Future Trilogy

Interestingly, not all of the lists I pooled data from included Back to the Future in their top ten, but when they did it was ranked consistently very high. I will concede that I’ve never been a huge fan of the series, but I can’t deny its popularity among filmgoers. The first two are classics, but unfortunately the third is largely one big self-referential joke. I’d have switched this one for Indiana Jones if it were my opinion.

When I was debating in my mind which film trilogies would or should make the list (prior to my research), this trilogy completely slipped my memory. But it is an immensely popular film series, and one that included consistently good movies (which is important to me). Although I admit I’m no fan of your typical political thriller, the Bourne trilogy is one I’ve watched many times (and on more than one occasion have marathoned my way through).

6. The Man with No Name/Dollars Trilogy

No list is complete without Sergio Leone’s The Dollars Trilogy. Although now over 50 years old, it is bar none the greatest cinematic masterpiece of the Spaghetti Western genre. Clint Eastwood’s The Man with No Name is one of the greatest film characters of all time and Ennio Morricone’s soundtrack is iconic of the film genre – one you’ve heard even if though you might not have watched the films. Interestingly this appears on every list except one.

If there was ever going to be an animated trilogy on this list, it could only have been this one. Pixar and Toy Story set the standard by which all other CGI animation is held against and broke the floodgates for other companies to try and reach its beautiful, simplistic glory. Despite being a cartoon meant for children, it transcends that by giving one of the most heartwarming stories we’ve seen in the past 20 years. Each film was consistently astounding (and when ranked on RottenTomatoes Toy Story comes out on top). The great thing about Toy Story for me is that it always echoed my growth in life with Andy’s. By the time I graduated, Toy Story 3 came around and Andy too graduated from high school and was moving on with his life. The scene where Woody waves to Andy before he drives off and he chokes up… Gosh. One of favorite scenes of all time. 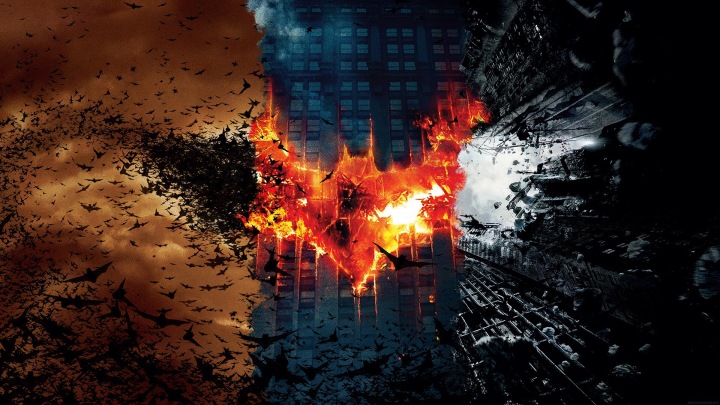 The only superhero trilogy on the list, and rightly so, Christopher Nolan’s Dark Knight trilogy sets itself apart from all others by making Batman a very believable, very dark, and very damaged hero. The data may be slightly skewed with this entry, as some lists were compiled before 2012, which is when the third release, The Dark Knight Rises was pushed out. But realistically if it were changed at all, it’d only really make third place instead of fourth.

I, like Peter Griffin, don’t really care much for the Godfather series. It just doesn’t do anything for me. But it did apparently do some great things for many others, meaning I’m in the minority here. I can’t deny the powerful/realistic subject matter, the haunting score by Nino Rota, the jaw dropping acting talent involved, Coppola’s vision, and that terrible third installment. Yeah, I went there.

This was bound to make it in. The first movie I remember playing over and over again as a child was The Empire Strikes Back, and to this day it’s my favorite of the three. With Star Wars, Lucas forever changed the way movies would be made. More than any other film, trilogy, or series, Star Wars is the most influential film to date. It defined what it means to be a blockbuster. It shook the lines between science fiction and fantasy, merged them, and created something wholly new and fun. And it has perhaps the most iconic film soundtrack of all time.

1. The Lord of the Rings Trilogy

Ahh yes. If it wasn’t Star Wars at number 1, it really couldn’t be anything other than Peter Jackson’s Lord of the Rings trilogy to take the cake. It has always been my favorite movie series, without any doubt, and why shouldn’t it be? It’s an immensely-scaled epic of a story, it’s the cornerstone of all modern fantasy, it’s perhaps the longest trilogy out there and it stays consistently good. It’s also a miracle of a feat that each installment was progressively better than the last despite how strong the previous installments were. It comes as no surprise that the trilogy holds more Academy Awards than any other, and alone The Return of the King has 11 wins (which is a tie for the most ever for one film). If any one facet of the trilogy were out of place, the acting, the music, the location shooting, the use of make-up instead of CGI, it may as well have flopped. But it all worked perfectly. Of all the lists I got my data from, the lowest rank Lord of the Rings ever received was a number 4. I, Geekritique, claim that this series above all others is the greatest cinematic feat ever (transcending the rank of mere trilogies) – my opinion, but still. The Lord of the Rings remains a touchstone for those who’ve grown up in this generation. One trilogy to rule them all. And if you’ve yet to see the extended editions, ha, that’s a couple more hours of awesome.

Below are the websites I pooled data from. I wish I could have found at least twenty, but 14 seemed to be pretty concise. Empire, HitFix, What Culture, MensXP, Buzzfeed, That Film Guy, WatchMojo, Pop Matters, The Top Tens, Rope of Silicon, Film.com, Quora, College Times, Nerdly.