This has to be the most bizarrely frustrating news/rumor I’ve heard in a while. Could it be that the planned series of 7 books in the mega popular series A Song of Ice and Fire might actually add another chapter? It’s now clear that the HBO series Game of Thrones (currently on its fourth season) will overtake the books within a year or two, unless Martin starts releasing the books once a year (hahaha). However, it is just a conjecture from George R.R. Martin’s editor, at this point. Here’s the excerpt from Anne Groell:

It’s frustrating because I honestly just don’t know how to feel about the news. Sure, another book down the line sounds great. Anne Groell certainly makes it seem like a splendid idea. But it’s frustrating because the books really should come first. When the show overtakes the novels, it’ll take extreme creative liberties due to lack of direction from any written guideline. By pushing the story back further you skew it all up even more. Also, it’s commonly worried about within the fandom that Martin won’t actually live to finish telling the tale (literally), and someone else will have to finish it for him. Why would he push the end of the series even further off?

There’s currently no release date or an estimated time of arrival for GRRM’s sixth installment, The Winds of Winter. The seventh book is currently known only as A Dream of Spring. Would the supposed eighth be breaking up the last two books, or coming after A Dream of Spring? I personally don’t think I’ll be buying into this comment from the editor as a fact. If she thinks that an eighth is only warranted because of an eighth kingdom… 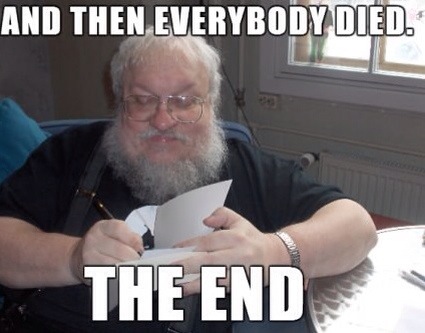