On December 1st, Del Rey released 4 short stories written by Landry Q. Walker within the canon Star Wars universe as we know it, as tie-ins to the Force Awakens. These four shorts will be collected, along with two others, in an anthology called ‘Tales from a Galaxy Far, Far Away: Aliens’. These stories, written for a targeted age of 8-12, are still enjoyable little snippets for ravenous fans of the Star Wars book range, as they tell tales of some of the alien creatures we’ve seen in the trailers and other media. Some spoilers from here on out. 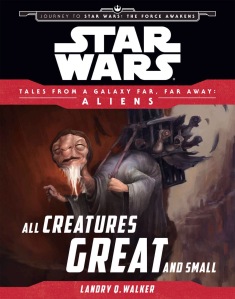 Can I just mention how terrible Disney and Del Rey are marketing this? The official title for this short story is ‘Star Wars: Journey to the Force Awakens: Tales from a Galaxy Far, Far Away: Aliens: All Creatures Great and Small.’ Nobody in their right mind is keeping up with their initiative in releasing books and media under the banner of Journey to the Force Awakens, as the range boasts anything and everything, from adult novels to coloring books! And I understand this is from the Tales from a Galaxy whatever, but that won’t be available until April of next year. It seems more like a filing method than a name. Let’s just call each short story as they’re titled by the author.

All Creatures Great and Small is the first of such stories I read, and it revolves around the awfully adorable creature known as Bobbajo. If you remember correctly, over a year ago Abrams released an Omaze video on the set of Jakku, and Bobbajo waddled across in the background, with a bunch of crates on his back. He’s a fully puppeted alien.

This short sees him travel to a small town on Jakku known as Reestkii, some 400 kilometers away from “the only settlement on the planet worth noting – Niima Outpost.” Bobbajo’s an ancient being, and a traveler, that the people sometimes call Storyteller or the Crittermonger. He’s a bit like Gandalf in this respect, performing tricks for kids in different towns. But instead of fireworks (like Gandalf) he uses the ultra-smart creatures in his crates to perform tricks for him. Nobody quite knows if he uses magic or not, but his creatures are surely talented.

Pirates come down out of the sky suddenly. And while they pillage the town, Bobbajo tells everyone a story after they were rounded up and shoved into the town hall. This story, for many of his listeners was hard to believe. It’s a story told from the perspective of Bobbajo’s creatures as they try and free him from imprisonment aboard the Death Star. From their vantage point they could see much of what was going on around the station: a Wookiee being detained by two stormtroopers; issues with the garbage chutes; blaster fire, etc.

Nobody seems to believe him, although they love his story. However, it must be said that the tale he tells going on in the background (of A New Hope playing out) is exactly what occurred on the Death Star, stuff that isn’t common knowledge. Where I take massive umbrage with this story is what it implies near the end. That certain events which played out in the original film may not be wholly attributed to the characters and actions we’ve assumed were the cause all of these years. And the story gives a really silly alternative. The last lines in the short neither confirm nor deny the story that Bobbajo tells to be true, but it does make it clear that their may be many truths.

It’s a cute read, and it’ll last you long enough to enjoy it with a cup of coffee. For two dollars I can’t say I’ve wasted my money, especially since it does a good job giving life to what will inevitably just be a background character in The Force Awakens.

Grab this in eBook

Enjoy this post? Consider becoming a patron, and supporting the site!

One thought on “Star Wars: All Creatures Great and Small (SHORT STORY REVIEW)”