Ever since Star Wars: Aftermath, the first canon novel to follow the events of Return of the Jedi, was released, many have questioned whether or not the mysterious figure at the close of the novel was indeed Grand Admiral Thrawn. Thrawn, or Mitth’raw’nuruodo, was a high-ranking blue-skinned male Chiss, who first arrived in Timothy Zahn’s Heir to the Empire. Despite the Empire’s highly speciesist ways, he was considered their greatest military strategist.

Heir to the Empire is now firmly a Legends book, meaning it isn’t considered canon. But many believe Thrawn to be one of the greatest additions to Star Wars lore, and fans are split on whether or not the Grand Admiral should be brought into canon Star Wars or not. But there is a big new hint that just hit Twitter as to whether or not he will be joining the canon.

In the second season of Star Wars Rebels, Ahsoka Tano quite ominously said “there’s always a bit of truth in legends.” This is a play on the real-life notion that all legends are based on some fact. But the term “Legends,” as Star Wars fans know, indicate any stories that aren’t considered canon. So in the meta text of that quote, fans have made the assumption that Rebels would reintroduce Legends into canon.

Dave Filoni, the show’s primary writer, had this to say on Twitter:

I'm looking forward to seeing you all at #SWCE 2016! And remember, there's always a bit of truth in legends. pic.twitter.com/auc6HDDAx1

The first two episodes of Star Wars Rebels season 3 will be shown at Star Wars Celebration Europe, which is exciting, but the second half of that tweet is even more revealing. Again that phrase “there’s always a bit of truth in legends,” is teased. But this time we get an image of a partial spine of an old Star Wars book. What book is that, and is that a hint towards what is coming? 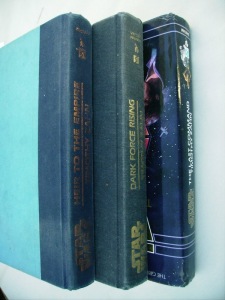 It looks as though that book’s spine matches that of Heir to the Empire, Timothy Zahn’s classic novel which introduced us to Thrawn himself. Is this some form of subtle confirmation? Or was Filoni just using that spine as a random symbol of the Legends legacy? What do you think? Would you like to see Ezra, Kanan and the rest of the Rebels team face off against him? Let me know your thoughts in the comments below!

Also, I just bought a Macbook Pro, so this is my first blogpost written on a computer. Prior to this I’ve been using my iPad 3 and iPhone 6 exclusively. That said, I’m totally at a loss for how to create good featured images on the new laptop, so I’ll be sticking to my iPad for that. If you have any tips, please let me know.

11 thoughts on “Will We See Grand Admiral Thrawn in Star Wars Rebels?”